No doubt, the emphasis this October for Breast Cancer Awareness Month will be on prevention, and rightly so. Recent statistics show that approximately 12% of all women in the United States will develop the disease in their lifetime.

In 2016, this means about 246,660 new breast cancer cases. Unfortunately, what also comes like clockwork every October is the onslaught of campaigns from organizations like Susan G. Komen which encourage mammograms as the only option for prevention.

Striking changes in official mammography recommendations were finalized in the beginning of 2016. However, this is leaving consumers with a lot of questions − and wanting answers − about other breast cancer screening options.

A report created in 2015 by the U.S. Preventative Task Force (USPTF) rattled the conventional oncology community when it first came out. The report, which was finalized this past January, recommended that women cut their exposure to mammograms by half:

It did not take long for the American Cancer Society (ACS) to respond with a change in their own policies. Before the ink was dry on the preliminary USPFT report, the ACS issued their recommendations, which took effect in July 2015.

The American Cancer Society now recommends that women with “average risk” of breast cancer begin annual exams at 45 years of age, not at 40. In addition, the ACS now recommend that women over 55 cut back to biennial screenings instead of getting them once a year.

This change in policy begs the question of why. Just what are the risks that the USPTF talks about in their report?

Unfortunately, when the ACS’s new recommendations came out, the focus was on the risk of “false positives.” False diagnoses of breast cancer after mammogram should be of concern since they can account for up to 20% of all detections. They can sometimes lead to risky biopsy and, in the most extreme cases, they can also lead to chemo, radiation, and mastectomy. In addition, the emotional strain of a breast cancer diagnosis causes needless suffering in all cases.

But false positives are just the tip of the iceberg when it comes to the dangers of mammography:

5 Tests You Can Take NOW for Early Breast Cancer Detection

By the time a tumor shows up with mammography, it has already been growing for five to eight years. For this reason and more, the word is getting out to women who wish to be proactive with breast cancer prevention that they do have alternatives to mammography:

Thermography is considered the “gold standard” of alternative testing options since it is non-invasive, safe, and can detect possible tumor activity years before a mammogram can. In fact, a 2008 study published in the American Journal of Surgery concluded that breast thermography has a 97% “sensitivity rating” for finding malignancies before a visible tumor has been formed. Contact the American College of Clinical Thermography for more information.

Iodine is absolutely vital for breast health because iodine acts as “food” for many functions connected to the reproductive and endocrine system… including the all-important thyroid. Consider a 24 hour loading test, available online. If possible, test to check if you have fluoride and bromide in your system as well. (Some of the iodine kits test for bromide as well.) Too much of these toxic environmental substances can block iodine absorption.

Because of sedentary, indoor lifestyles and bad eating habits, most Americans are deficient in Vitamin D. This is a sad fact since there is a direct and research-verified connection between vitamin D deficiency and breast cancer. A test for your vitamin levels can usually be easily administered by your doctor.

Getting your overall hormone levels checked is a good choice especially during your perimenopausal and menopausal years. Saliva tests that take a look at your “Estrogen Quotient” can check the balance of the three estrogens that affect breast health: estriol, estrone, and especially estradiol. Other hormone-related tests can check progesterone, testosterone, DHEA, cortisol, and other stress-related hormones that play a part in overall breast health. Another important test is one that will check for estrogen methylation, which is basically the way that the body metabolizes estrogen. Slow or non-existent methylation of hormones can be a sign of cancer risk since cancer cells tend to have improper methylation overall.

Finally, if you suspect that you may be at high risk of cancer, then ONCOblot may be for you. This is a unique and one-of-a-kind test that was created by Purdue University researchers Drs. Dorothy and James Morré. ONCOblot will check for the universal cancer cell marker ENOX2 and can also identify the specific origin of cancer cells in the bloodstream. ONCOblot is said to have a 99% accuracy rate for discovering tumors when they are tinier than a pinhead. Go to the Oncoblot website to find a professional who can administer the test. 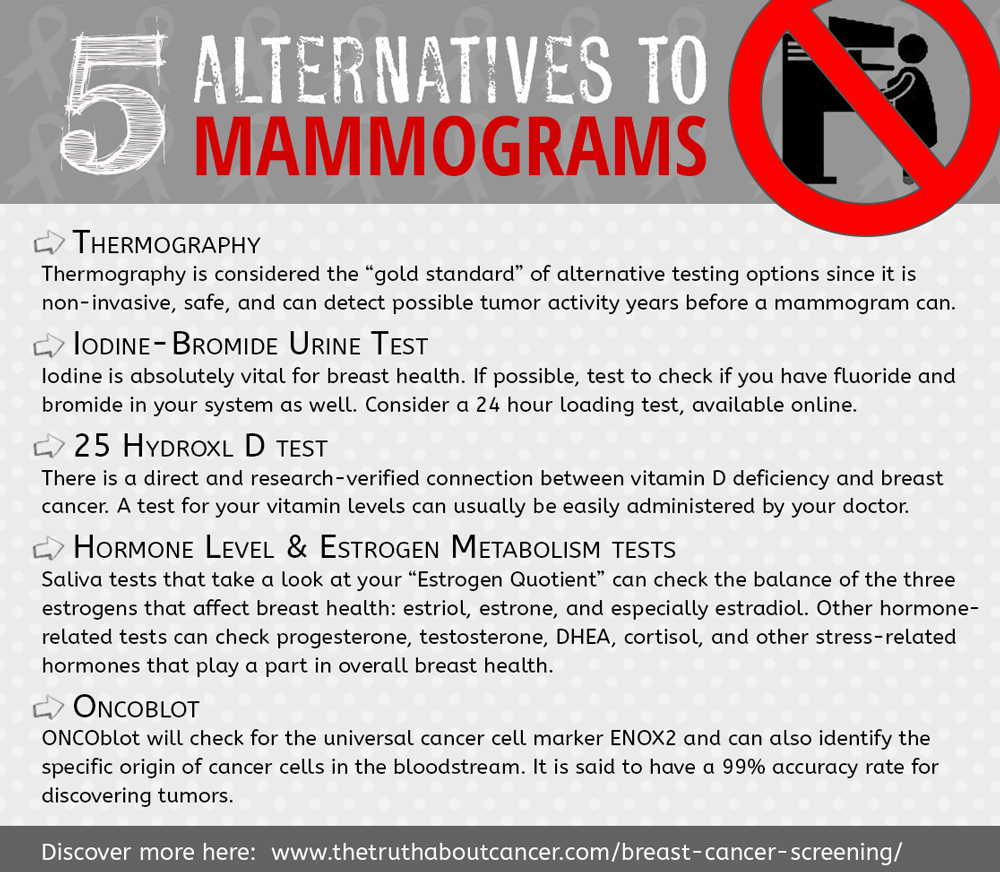 This October and in the months to come, the choice to get a mammogram will be a deeply personal yet important one, and only you can decide if it is right for you. At the same time, it is important to know the dangers and also that you have options other than mammography for breast cancer screening. Know your breast cancer signs and be aware that safe and extremely effective alternative testing methods do exist and more women are using them every year.

Want to be notified when other awesome interviews or articles are added?
Click here for our free weekly digest. You’ll be glad you did.